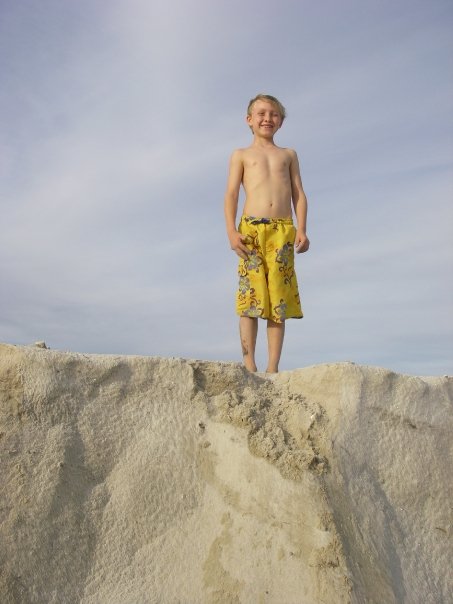 Orion standing tall in the beaches of Alabama.

This is about my 4th trip down to Hatteras in 2007 to hang out with Greg. He’s still in Chemo so he has one week of chemo and feels like total crap then he can kite for a week before he has to go back and do the chemo treatment again. His recovery from cancer has been amazing everyone including the doctors and myself.

I found a really cool dead sea turtle on the beach that was the biggest one I had ever seen. I grabbed the skull and soaked it in bleach. It will be the perfect skull for my new Honda Minivan I plan on traveling with Orion around the US in. Got stuck in traffic for 2.5 hours in Dover because there was a race there. Ended up running a tollbooth because I was so pissed off. The worst part is the PT cruiser is having overheating problems so I had to crank the heat while sitting in traffic on hot summer days.

There was several days without winds so Greg and I caught the ferry ot Ocaroke island and tried to walk on a nature trail but mostly got attacked by huge hordes of mosquitos. I pulled my pants down to go to the bathroom in a dune and got over 40 bug bites on my butt. We had a good time digging up sand crabs in the sand and it was great hanging out with Greg waiting for the wind.

Someone stopped by our campsite and left a bunch of trash and stole our clothesline and my cool sea turtle skull, which totally bummed me out. Probably for the better anyway, I’m sure it’s a federal crime to be caught with a sea turtle skull.

Also bought a Honda minivan and took a 3 week trip with Orion down to Florida. We stopped at Hatteras for a week on the way down and hung out with Greg then went to Orlando for a week and then to Dauphin Island in Alabama for a week. Highlights of that trip were the Aquarium in Georgia which was one of the nicest I’ve ever been to. Lots of crabby action on the beach with at least 5 different species of Crabs Orion and I played with. We built a minigolf course on the beach after I bought a used putter from a golf course for $5. Orion got to fly kites for a little while and seemed to enjoy that, I kited a bit but mostly hung out with Orion on the beach. There was a nice Marine lab in Dauphin Island and it was great to spend time with Greg. Living out of the van was fantastic, I am a nomad at heart. The Odyssey is the best vehicle I’ve ever owned.

This life just keeps getting better and better.