The trip to Iceland in 2007 was really something special. In 10 days Orion and I managed to work our way all the way around the Ring Road and back to Reykjavik. The biggest thrill of the trip was driving the jeep across a glacially fed stream and having the river so deep that there was water coming up onto the windshield. Considering that we had just driven about 4 hours without seeing another car it could have been very bad if the car had just floated away down the river. We also got to hike around on magnificent glaciers and ride really cool amphibious cars into big bays full of icebergs. There were countless hot springs, cauldrons and even a geyser or two. When we went whale watching on an old Oak ship we got within 50 feet of several Humpback and Blue Whales. The amazing natural beauty of the island was supplemented with frequent stops at geothermally heated swimming pools, which seemed to be located everywhere in Iceland. 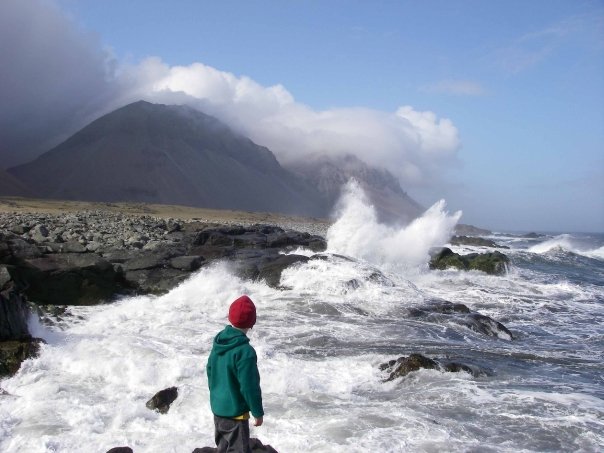 The first day we arrived in the morning from an overnight flight and went to get the rental car. It was a good idea to book in advance because we got a 4wd car for the price of a subcompact. Normally 4wd cars are twice the price so I was pretty happy. The first place we went to was the Blue Lagoon which was a giant outside geothermally heated pool that used the excess heat from the neighboring power plant. With insanely cold winds blowing at 40-50 mph it was a surreal scene soaking in the steaming hot waters while the air was so cold that we had to wear every piece of clothing we brought just to stay warm. The blue lagoon was like some strange set from a sci-fi movie with the bright blue waters and the huge power plant looming in the background.

After that we drove around and found a set of hot springs in the middle of nowhere then we went to the bridge between 2 continents (America and Europe) where we could see the place where the ground was moving apart 2cm a year! There was a neat Viking ship replica that someone had made and sailed to America to prove it could be done. We started to drive to Thingvellir and ended up camping at the south end of a large lake. A man who spoke no English awakened me at about 9:30 at night, still bright as day. His car had a flat tire and the tire iron was the wrong size. I groggily woke up and helped him change his tire then went back to bed. Several hours later I was awakened by the park people who wanted me to pay to camp so I paid them and they went away. All night long I kept waking up and was surprised to see that it was totally light out even at 3:00 AM. The next day we checked out Thingvellir which was an amazing place with cool waterfalls and neat trails through a crevasse in the rocks. 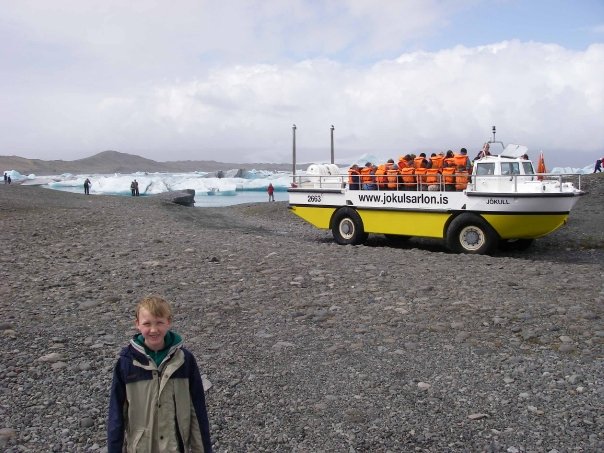 After that we hit Geiser and Stokker the original and first Geisers that all others are named after. Stokker erupted and Orion was impressed, we spend a bunch of time at the geothermal museum trying to learn things. The georthermal power plants in Iceland are mostly open to the public so people can go in and see the huge turbines and machines that create all the power from the steam coming out of the ground. You would never have something like that in the US for fear of vandalism or terrorists.

The first 2 days the wind blew so hard that it was very difficult to get the car door open if it was against the wind. We had to park the car so one door was downwind and both get out that one door. It was also hard to walk at times so I didn’t fly my small trainer kite I brought because I didn’t want to die. It was so windy that I actually had to drive under the speed limit because it kept feeling like our car was going to get blown off the road. 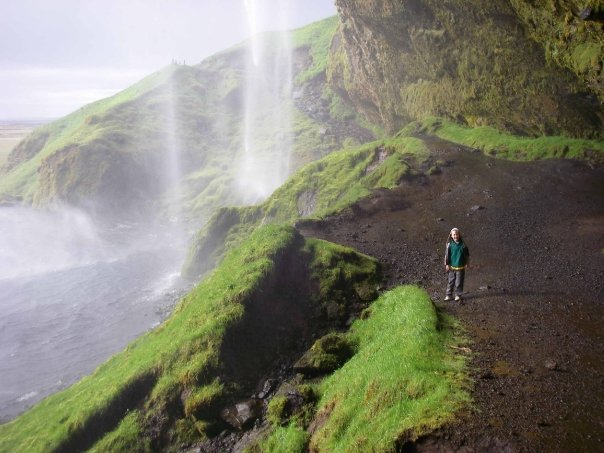 Tried to visit Landmannalauger which was the largest geothermal hot-pot/hot springs area in Iceland and also one of the most secluded by the back road way. That turned out to be a mistake because the road was laughably bad. After about 2 hours of driving up the side of hillsides of pumice and across amazing lava fields we found ourselves at a river to cross. Normally you’d take a tent pole and check the depth before you drove through it since it was pretty dark water and it was late in the day. Glacially fed rivers tend to peak mid-day from the hot sun melting the ice and are really best to cross in the morning. It looked really shallow so I just started to cross it. I started to panic when the water was washing up on the windshield, the car was acting like it was going to stall and it felt like it was starting to float away. Amazingly we made it and Orion was totally excited, completely oblivious to the dangers. We drove another 20 minutes and hit another river, there was no way I was going to cross that so we drove back and crossed the deep river a 2nd time.

We hit the Skafatell glacier and hiked around on top of it and checked out a couple of ice caves. You could see the effects of global warming by the way the glacier had receded several kilometers from the visitor center they had built there. Then we went to Jokulsarlon, which was a huge bay full of fresh icebergs that had calved off the glacier. They had enormous amphibious vehicles that people would board for about $20 and then got to take a long 30-minute tour of the bay. It was really neat and Orion got to eat some ice that was thousands of years old.

The SE corner of Iceland was by far the most beautiful with huge amazing waterfalls around every corner and vast ocean overlooks with crashing waves on the rocks. We worked our way around the island stopping here and there checking out anything that looked neat. It was hard to drive for more than 20 minutes without stopping there was so much cool stuff to see. We made it all the way to the East coast and camped out on one of the fjords there before heading back in towards the center of the island.

We went to see Deltifoss, the biggest waterfall in all of Europe and then checked out the grand canyon of Iceland, a 25 km long canyon with a huge river running through it. In Husavik we went to the heated swimming pool for the first time with the big kids waterslides. We had so much fun that day that we decided to go to every swimming pool at least once a day for the rest of the trip. There was a big whale museum that we checked out before going on the 3 hours whale-watching trip. That was the only time Orion had a hard time, he just wasn’t as impressed with the whales as I was and got terribly bored after 3 hours on the boat. He made some friends with other kids on the cruise and they had fun poking around under the main deck. I thought it was fantastic to see the hugest creatures on earth, the mighty Blue whales from only a few feet away. These animals are so amazing it’s hard to believe we almost hunted them to extinction. I could see how they would be easy to catch, they were every docile and did not seem to react much to the boats presence hardly at all.

From Husavik we headed over to Akureyri where we went and played at an even bigger waterpark with 2 kids slides. At one point while driving around I almost hit a very young girl who rushed out in the street in front of my car. I barely managed to avoid hitting her, which would have turned my amazing aweful trip into a total nightmare. 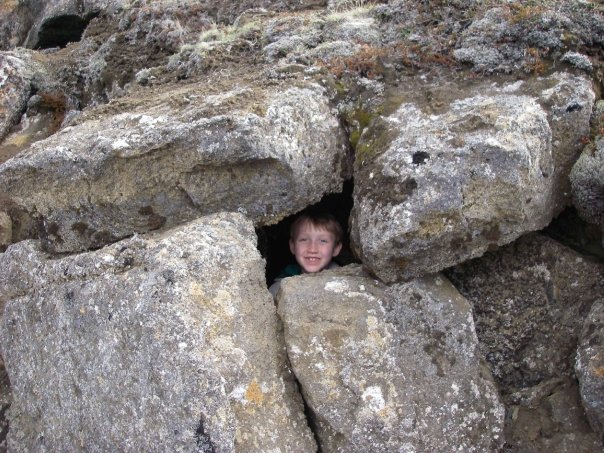 Then we headed back to Reykjavik for the last 2 days of our trip. We went to see the sights of Reykjavik, which ended up being quite a lot of fun. There was a neat little kids park where many of the rides were free; I got in trouble for trying to drive around in the little kiddie electric cars that were only for the kids. There were also little remote control boar rides and a strange sort of mini science museum set up in a tent outside. We camped out in a campsite in the city, and it was really the only time during the whole trip we actually stayed in an official campsite, most of the time we’d just crash out in the middle of nowhere. Iceland is extremely sparsely populated and people didn’t seem to mind you camping on their property as long as you were respectful.

On the way back I went to the wrong airport and spent a long time driving around the airport in Reykjavik before I finally figured out that the correct airport was really 40 km away to the south. Luckily we didn’t miss our flight.

Iceland was a fantastic place to visit if you don’t mind a little cold and roughing it a bit. There was some spectacular natural beauty that was reminiscent of places like Alaska. Although food and gas were spectacularly expensive groceries were relatively cheap and the rental car ended up only being $60 a day. I will defidently remember Iceland as one of my favorite trips ever and strongly recommend it as a travel destination.

2 thoughts on “Took Child to Iceland, Drove Hours from Anyone, Drove Across River, Rental Car Almost Floated Away. Don’t Tell his Mom.”