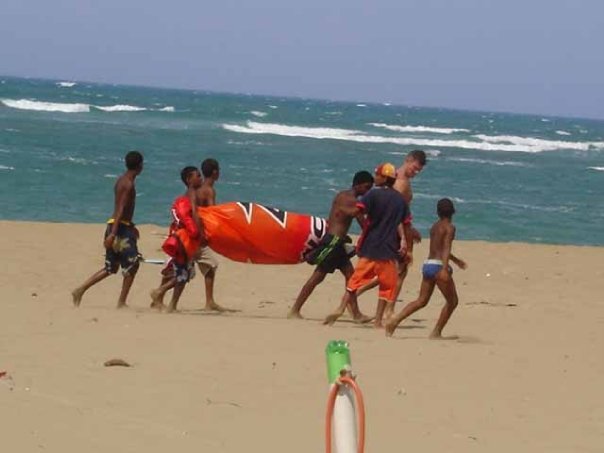 How many kids does it take to carry Kyle’s kite?

The following is an account of 12 days I spent in the DR in 2004 with Kyle where I was desperately trying to learn to kite.

What day is it, I can’t remember and I don’t care. One day blurs into another. Eat, sleep, kite that has become the routine. I can’t remember why I do the eating and sleeping anymore except that I can’t kite if I don’t do the other two. I feel like I’m in a movie, beautiful women everywhere, there is sun and sand and little local DR kids that grab your kite and walk it back up the beach for you for 50 pesos. I’m making these kids downright rich as I’ve been going up and down the beach 7 times a day for about the last 12 days.

Just how much abuse can a body take anyway? Every day I look in the mirror and see a handful of new bruises. It’s so exhausting learning Kiteboarding that all I’ve done for the last 3 days is eat, sleep and board and hardly anything else. It is so brutal that I am sleeping almost 12 hours a day and often have to lay down for a nap in the middle of the day. I feel like a lame old man (no offense mom, dad and President Bush all of which love their naps). I can get up on the board consistently now and can stay up for a pretty long time, my major problems in the past have been that I have been way under-powered. I am flying the 13.5 meter kite in about 20-25 knots of wind every day and that is about the right size kite for me. For Ithaca I’m going to need a 25 meter kite I think seeing as how most of the time the winds are low there (under 10mph).

Kyle is great, I had lots of fear about this trip with him, but he’s a good  kiteboarder and has been very supportive of my learning curve. It’s nice to have company on this trip. I left the fins for my Naish board at home like an idiot so I tried renting a slingshot board and now I bought Kyle’s Mutant. It’s a directional board that is a lot like my twin tip. It’s pretty easy to get up and ride on, easier than my board anyway. I have been practicing keeping myself upwind. Every day I go out I have more fun than the last. This is the hardest sport I’ve ever tried to learn but it’s worth it. I can’t wait to start doing tricks and jumping. It’s way fun just getting up and being able to ride, I took a lesson and that helped quite a bit maybe tomorrow or the day after I will take another lesson. My kite is very old and quite slow. It’s good in a way because it simulates the slowness of bigger kites which is what I’ll be flying later anyway.

We go into town every morning and grab a late lunch. We always end up arguing with the motorcycle drivers over the price of the ticket. They always want to charge you 3x what it is worth. It sucks haggling with the drivers all the time but they are really pretty reasonable. Kyle’s Spanish is better than he made it out to be so that is cool. We found out the other day that we get free breakfast at the hotel so now we eat that every morning. The winds here are amazing, super consistent and steady. 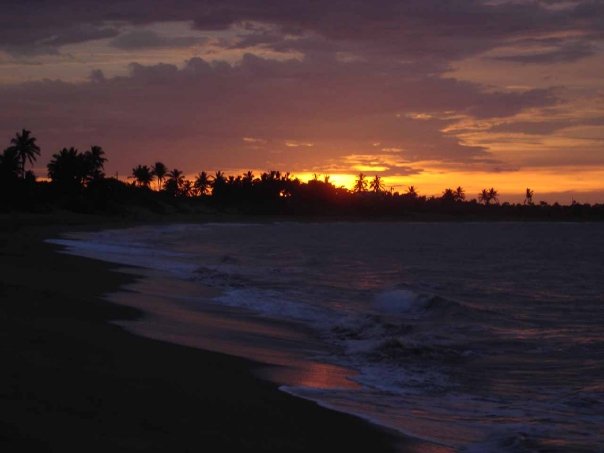 The other night we went into town and had supper. The town was really cool where the local people live. There were no tourists anywhere. The streets were all made of dirt and it was obvious that the people were very, very
poor. I’m get tired of the tourist hotels and bars. The locals have almost none of the money here, like in most places the locals toil away for very little money. There are many kids on the beach that help you with your kites for almost nothing, which is cool. Many of them are making quite a lot of money off me by carrying my kite back up the beach. Yesterday I did 7 runs, six of which had my kite carried back up by the kids. At 50 pesos a trip (about $1.75) it’s getting pretty expensive. Yesterday I had to rip off both my big toenails and didn’t get any new cuts and bruises so I would say it was a pretty good day. Sitting and waiting for the wind really sucks because you don’t know if you should go out and do something else or if you should just keep waiting. Sometimes it make me crazy sitting around and waiting for the wind. Kyle is a great guy and a really good sport. The other day he even offered to let me fly his 18 which I thought was very generous of him but I turned him down because I didn’t want to trash his $1400 kite by crashing it or something. My falls have been getting more and more spectacular. Sometimes I get going so fast and I don’t have enough kite control to slow the damn thing down. I try to edge and usually end up getting flung in the air like a rag doll. Good kiteboarders make it look so unbelievably easy but I think kiteboarding is the hardest and most brutal sport I have ever learned, even more so than whitewater kayaking. Only 3 days left and I feel like its going to be very hard to readjust back to the real world. I’ll really miss this place. Total cost for this vacation will be somewhere around $100 a day (with everything included) but it has all been well worth it.

We went snorkeling here and the reefs were very barren and there was not very many things except a few scattered urchins and some fish. There is a one-legged kiteboarder here who sells conch shells to the tourists and collect kite gear along the beach and has it laid out on a surfboard for sale. He’s a pretty interesting fellow. There is a couple of really attractive American women who look like they got stuck here somehow, but they don’t speak Spanish. We met a very nice woman named Lizzy who is a German doctor. She was nice and I let her borrow a couple of my kites. We went out to dinner with her the other night and had a pretty good time. We ran out of drinking water which really sucked ass, now we have more water again from town. I carried 5 gallons of water and a gallon of OJ in my backpack which weighed about 60lbs on the back of a motorconcho. When 3 people ride on the motorcycles the driver just sits on the gas tank. It was a crazy night. People here do tend to get stircrazy when there is no wind. 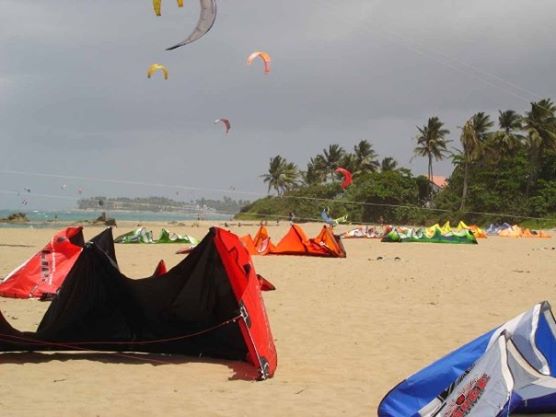 It’s our last day for kiteboarding, and we’re leaving tomorrow. I am still having trouble staying upwind, but I’m not that stressed over it, I’m sure these skills will develop. I’m having a lot of fun on the water, which is the most important thing. Kiteboarding reminds me of what surfing is like except it’s a lot easier in many ways because you are hooked into the kite which gives you a lot of stability and power. The mutant that I’m riding is a crossover board, its directional like a surfboard but it’s thin like a wakeboard and it has fins on the front and the back. It will be hard to return to my normal life in NY. Life is easy in the DR, I spend most of my time resting and trying to conserve my energy to kiteboard with. It feels like I’m always tired, the only night I really had fun going out was the one day we got skunked and the wind never got over 16 knots. 16 knots in Ithaca would have been a stellar day to be sure.

If I was to recommend for anyone to come to Cabarete and learn to kiteboard I would not advise them to stay at the Extreme Hotel, instead they should get a place for around $30/night around the west end of Cabarete. As for schools the Laurel Eastman school of kiteboarding seems like the most laid back and best one.  Leaving here seems like such a shame, I can see how so many expatriates end up getting a room and spending a long, long time here. It’s the perfect place to kiteboard, there is wind almost every day, you can eat for less than $10 a day and the people are very nice. All the people we met here that were here for an extended holiday were extremely friendly and kind. The moto drivers were kind of pain to be sure, but they were not as bad as they could have been. They only tried to double charge us, not quadruple. I guess I should be thankful.