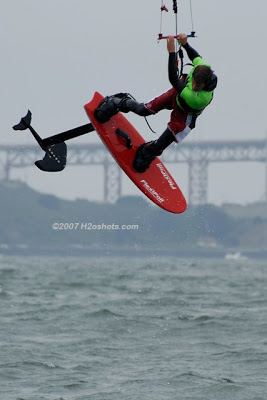 About 5 years ago I was first introduced to Hydrofoiling with a kite by my good friend Norman McGuire (forum name kiterider) from Montreal, Quebec. He didn’t know me well enough to know what a risk he was taking to let me use his fancy carbon fiber Carafino hydrofoils as I pretty much destroy everything I touch. I first tried it at the Magdalen Islands which is about 15 hours of driving and then a very long 6-hour ferry ride that costs more than most plane tickets I’ve bought. Over the years, I have been to the Magdalen Islands for about 2 weeks in the summer at least 5 times, and each time Norman would show up with a new hydrofoil to try. One year he told me it was time to go strapless. I thought he was nuts, no one is riding these things strapless. After a few hours of flailing around in the water like a Noob, I finally figured it out. I was hooked.

Ironically the one year I missed going with Norman to the islands (last year) I ended up buying a hydrofoil of my own. Last year was the first year of the aluminum mast and fuselage foils and there were at least 3 different brands that had models that came out in metal. The Liquid Force model was the most hyped up, but also looked very draggy to me. The Zeeko and TKF (The Kite Foil) brands both looked very nice, but I was won over by the US sales importer Eugene who was a whole lot cooler than whoever I was emailing back and forth with at TKF in Dubai. TKF guys seemed to only want to send me pre typed up form emails about why TKF was better than everyone else’s foils with a few hand typed sentences in between to make it look like they were talking directly to me. Eugene was honest and forthcoming and was an incredibly easy guy to deal with, he was also stoked on foiling as well. We talked for almost an hour on the phone before I sent him all my money. I had tried several brands of foils over the years with Norman and honestly the freeride carbon Zeeko was my favorite. It was the easiest to ride, the most stable and created what I feel like was the best foiling experience. The Carafino worked in much less wind, but it felt draggy and slow. The Spotz foil was just too hard to ride, even with the freeride wing. With the Race wing on it, you had to be going really quite fast just to get out of the water and was pretty much useless in light winds with me (although Norman seemed to do fine).

No one had tested the alloy Zeeko yet as it was not released yet and the design was quite a bit different than the carbon one. That being said I have been incredibly satisfied with the feeling of riding the alloy Zeeko foil. It rises early and at a very low speed. It is quite stable, even when going fast. The faster you go generally the more stable it is. If your foot position is off you can get into a situation with runaway wobble, but that is only going to happen if you’re riding strapless. Once you start paying more attention to your foot position it’s easy to avoid the wobbles. The alloy Zeeko does not have quite as much lateral stability on the Yaw axis which could easily be corrected by putting a larger kitesurf fin on the tail of the foil. Once you get up to speed, there is more yaw stability and it is only distracting at lower speeds. It is also much more stable the more of the mast that is in the water. If you come almost all the way out the foil wants to tip over on it’s side much more.

I felt like the Zeeko Alloy foil was a great foil to learn on as it was nigh-indestructible (at least compared to the Carbon versions which are usually over $3000), cheap and worked in very little wind. I was able to get my hands on the alloy Zeeko for about $800 shipped which was much less than both the LF and TKF foils at the time. The LF foils have dropped significantly in price, but I still feel like it is an inferior design to the Zeeko although I have never ridden a LF foil. To see the current retail offerings of Zeeko foils from their France based website click here, but if you want to buy them in the US you should email Eugene for better pricing or check out Eugene’s website.

I did hit several big logs with the alloy Zeeko but the mast and foil were undamaged. Cayuga Lake is littered with logs in the spring and clogged with seaweed in the late summer and fall. There is a precious short window I have to ride in and I plan on getting out there every day I can when the wind is steady enough. I’ve ridden mostly with the 18 Meter Sonic FR Flysurfer kite and I have to say while it is a very easy kite to get up and riding with as so as you hit the gas you are quickly overpowered even in very light winds (over 13mph). I think for the alloy Zeeko the biggest kite you will probably ever want to use is a 15 meter Sonic FR which is an incredible match for this foil. Riding a high AR very efficient kite like that just makes everything feel right in the world as you want to go faster you can, and when you do the kite pulls a lot harder allowing you to go even faster. The whole cycle of going faster and then having the kite pull harder in light winds is incredibly alluring, I found myself having much more fun than I’ve ever had in <13mph of wind before. I have to say if you want to go fast it’s MUCH safer to ride strapless as wipeouts at high speeds with your foot still in the straps ends up feeling like you’re going to end up with a broken ankle.

Ted Bautista is the US importer for Flysurfer & Spleene and the owner of Flysurfer-USA and has done more to help me with my kiteboarding progression in the last 15 years than anyone else.  In return, I’ve purchased more than $15,000 in kites & boards from him with never a single regret. I’ve owned almost every size of Speed 1,2,3 & Psycho 4 kites as well as about 6 Spleene kiteboards and have really loved them all. I might as well just sign over every paycheck to him, as he deserves it for how much fun his gear helps me have.

The best part of kite hydro foiling is that it is incredibly hard to do. When you are balancing just right on the board with way more weight on the front foot than you think you should have and you’re soaring along at 20-30mph you feel like the best kiteboarder in the world. It’s like “Holy crap I’m going so fast and I’m not even using straps and if I lose my concentration for even a second I’m a goner.” It’s great to go out in almost no wind and be able to get into and stay in that flow state for such a long period of time. It was also very relaxing on my troubled knees which seem to get more and more ornery in my old age. My whole body complains when I try to go out and jump 30 feet in the air on every tack for 5 hours like I used to when I was younger. I need to find a way to grow old gracefully and still be able to have more fun than everyone else. Kite Hydrofoiling with Flysurfer Kites and the Zeeko Alloy hydrofoil allows me to do that.

2 thoughts on “Kite Hydrofoiling :My Healthiest Addiction Yet”