After 3 weeks on the road my return home is hard. Everything has its place, everything is organized and there is stress around that need for organization. I was so much happier sleeping in my van on the side of the road near abandoned diners and in rest areas along the freeway. I forgot how hard it was to live in one place … everything is like a dream. I know what I’m doing and what I’m supposed to be doing but so much of it feels like I’m sleepwalking. 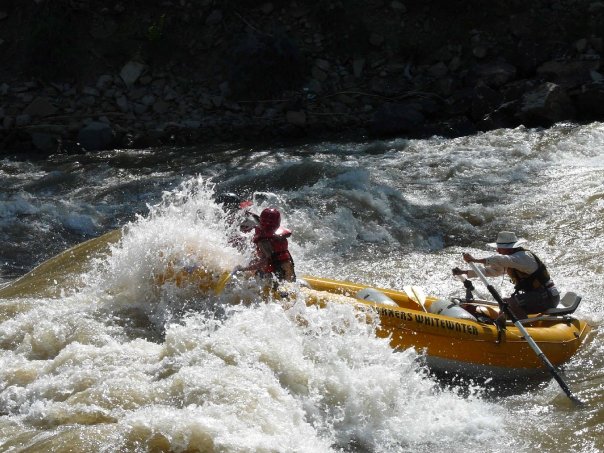 Traveling across America in 2008 was amazing, I remembered why I’ve done it so many times in the past. With Orion in tow it was even more fun. We surfed down sanddunes on our bellies under a full moon, we rafted down raging rivers in Colorado and climbed the huge alien like rock formations at Joshua tree for hours on end, even at night. I saw a lot of beauty that I didn’t know existed in the US. Huge windfarms with the dancing blades of 200 foot high towers as far as the eye could see. The hoodoos of Bryce were the most amazing and beautiful rock formations I had ever seen in my life. It was fantastic wandering into Bryce canyon with no idea what to expect only to be amazed beyond belief. The hike up to Angel’s Landing at Zion was breathtaking and frightening at the same time. It was amazing to watch Orion carefully and successfully navigate it with me nervously holding onto a rope tied around his waist. I knew if I fell I’d have to let go quickly and if Orion fell I’d have to hold on for dear life. Orion was amazing and added so much to the adventure for me. To watch him grow and learn was the greatest reward of all. He was very interested in the Jr. Ranger programs, which added so much to the trip for him he achieved at least 8 Jr. Ranger badges! I flew my sister in from Oregon to Las Vegas to camp with us for a week of our journey and it was so special to be with her. I can’t imagine the trip without her, she was so amazing with Orion and they have such a nice relationship even though she lives thousands of miles away.

In my journeys I was able to help others, a boy who was 8 was badly dehydrated and throwing up, I carried him on my back for over 1000 steep vertical feet. There was a native American woman who crashed her car very badly on an Indian reservation and no one knew anything about emergency rescue techniques. It was bizarre because being an Emt for 4.5 years I had been in that situation before, but never without anyone else there who was clued in. I wondered why 2 incidents had happened in 2.5 weeks and realize it was because we were moving. We had covered thousands of miles in just a couple of weeks.

I realize more than ever that for me routine is the spirit killer. I heard on the radio that most people travel less than 5 km every day and most people visit the same places on the same times every day. This is my inclination, to become a creature of habit and I must work to make sure that I never let that happen.