It’s so rare in life that everything goes your way. So often we spend our days battling with entropy as our world seems to stay in a perpetual state of near disasters. It’s rare that everything goes right, and even rarer that this happens on the day that you commit yourself to another. Nature has always been my religion, the place I go to find peace and solace. It seemed fitting that Thilde and I would say our vows to each other in the middle of the body of water I had grown to love the most, Cayuga Lake.

The sound of over a hundred kayaks, canoes and standup paddleboards bumping together as the waves rolled by. We hadn’t rehearsed the words we were going to say, but that was fine because life wasn’t meant to be rehearsed. I was lucky enough to choose to be with a woman who cared little for words anyway. Thilde was a woman who cherished actions and affection over words. We had made it this far, and convinced 150 people to gather themselves together in the middle of Cayuga Lake for a most unconventional ceremony to celebrate our love.

END_OF_DOCUMENT_TOKEN_TO_BE_REPLACED 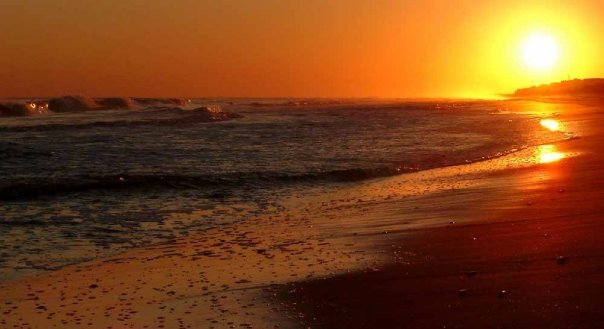 END_OF_DOCUMENT_TOKEN_TO_BE_REPLACED

Words cannot accurately convey the majesty and awe that the Magdalen Islands inspire.

I launched the kayak as the sun turned red on the horizon. Strapping a headlamp on I jumped into my 14′ sea kayak and tightly gripped my favorite paddle and forced my way out through the surf. The beach was tiny, only about 20 feet wide and was the only beach for miles in either direction. The swell caused the giant kayak to tip and sway more than I ever thought possible in a sea kayak. A few feet away the waves pounded the rocks and cliff face. The lighthouse shot up from the cliff. As I paddled away I felt like I had found the edge of the earth. Here the land abruptly ended and sheer sandstone cliffs that would easily give way under your feet shot up hundreds of feet into the air. There were caves everywhere that were easily carved out by the forceful action of the waves. The surging tides would trap air in the holes and they would build up pressure and blow out air, sometimes high up into the air. The noise and the surging water struck a nerve somewhere deep inside me. I plunged the paddle into the water stroke after stroke and mile melted into mile. Before I knew it the sun had disappeared and the lighthouse was miles behind me, completely gone from view.

I had to check out one of the caves before I turned around so I cautiously turned on my headlamp and started paddling into one that looked creepy. The water was rising and falling quickly and the cave went on for a long way. After several hundred yards there was no light left except the light from my headlamp with no end to the cave in sight. As the swell surged up and down little holes in the walls would blow out water, sometimes with surprising force. It was exhilarating and frightening all at the same time, I decided to slowly back paddle my way out again.

Paddling back under a full moon was totally unreal. I could see the waves crash against the rocks and the cliff face rose up hundreds of feet with the moon peaking over the top. I paddled with a furious intensity for miles until I reached the lighthouse again. I left a flashlight on my car so I could find it on the cliff face, the two red LEDs stared out at me in the water like some kind of hideous beast waiting to devour me.

END_OF_DOCUMENT_TOKEN_TO_BE_REPLACED

When I first arrived I felt like I had died and gone to paddling heaven. Everywhere I looked huge landslides had removed parts of the road. The rivers were swollen and running that dark coffee brown color. Several bridges had recently collapsed, others were closed because the recent rains had moved the foundations. This is how my Costa Rican vacation began … 11 straight days of class IV-V rivers. 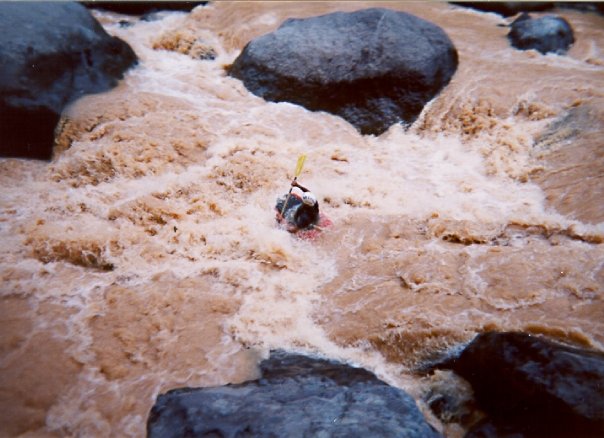 For the past week it had rained nonstop and things had been way too high to run. Finally there was some relief and the sun was starting to peak through. They had refused to let me take my kayak on the plane because of some silly trade embargo against Costa Rica for the holidays. Even worse than that my flight was delayed three hours so the car rental place was closed. They were nice enough to leave a note though, so that was cool. There was some Costa Rican sleeping behind the rental car counter, I asked him if he had my car, he told be to sleep in the next car rental booth over in Spanish. I followed a very attractive Australian woman I had met on the plane to a local hostel. Apparently she was going to Costa Rica to do conservation work with Sea turtles. Once at the hostel I tried to get a room with her which the woman at the counter found quite amusing. She put me in a room with some scuba diver from London who apparently also followed another attractive woman from the airport on sea turtle conservation work. Man what a racket, get all these attractive woman to do conservation work and lure unsuspecting Gringos into your hostel. Me and the limey stayed up late into the night talking then finally crashed out.

END_OF_DOCUMENT_TOKEN_TO_BE_REPLACED

Prologue: I wrote this true story for Dennis Squires’ wilderness adventures book. Unfortudently Dennis died paddling in NZ several years ago so its unlikely this story will ever see print. I am posting it here instead.

You can see the tiny eddy in the crack of the rock at the top left.  The water level was much higher when Mike made his first descent.
Ever have such a bad experience boating that you could hardly talk about it or write about it for years. An event that instilled so much fear in your being that it would fundamentally shift the way you kayaked forever? Mike Burns and I had an experience like this several years ago on the Middle Branch of the Sacandaga in Upstate NY.

END_OF_DOCUMENT_TOKEN_TO_BE_REPLACED 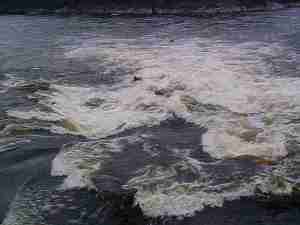 Mike running the ‘class V’ section, he’s the tiny dot in the middle of the picture.

Trip report of the Gatineau Festival 2001

This weekend to the Gatineau festival was by far the best paddling weekend all summer. I was skeptical about the 6 hr drive and the $45 Canadian entrance fee. After all was said and done I can safely say that it was well worth it. I have never met any culture that was as hospitable as the French-Canadians. The fed us, shuttled us, let us camp and gave us hot showers and kept up a nice fire that burned all night long. Never once was I made to feel as stupid as I felt for not being able to speak French. Being surrounded by the french speaking Canadians all the time was really weird, it was almost like being in another country. I guess Canada is another country.

We arrived Friday Evening and checked in, there was already over 100 people there. We milled about then crashed for the night after getting all the info we could on the river. They handed out these neat little maps in French and English that showed all the channels and in one little section had a nifty big X on it that said “don’t go here” with Class V rapids right next to them. Needless to say, we’d be running that channel the next day.