We drove 10 hours to Acadia in Maine and had awesome Wild blueberry pancakes and my yearly lobster omelette at Jordans. Afterwards we hiked the Beehive trail (Precipice was closed) and then hung out on the beach for several hours. There was a baby seal that had climbed out to sun itself that was so adorable. I so wanted to club it, doesn’t everyone fantasize about clubbing baby seals? After chilling on the beach for several hours we setup and played a boardgame next to all my spraypaint art and I managed to sell several pieces.

We headed out to Canada and drove another 10 hours to the ferry. I setup my artwork on the ferry to sell, but the captain of the ship didn’t have such a good sense of humor about that. The ferry was huge, like a cruiseliner with 5 decks and a movie theater, arcade, cafeteria, bar and restaurant. The kids loved running around and playing hide and seek on the ship, and they had 5.5 hrs to do it. The ferry was insanely expensive, I paid $200 each way and Norman with his schoolbus paid almost $500 each way. We made arrangements to arrive a day early for a huge party. The first night was a huge party where almost everyone on the island attended. There was some fantastic Quebecian music that I loved dancing like a crazy person to. Everyone was super friendly, although many of the people I talked to who lived on the island spoke no English at all.

END_OF_DOCUMENT_TOKEN_TO_BE_REPLACED 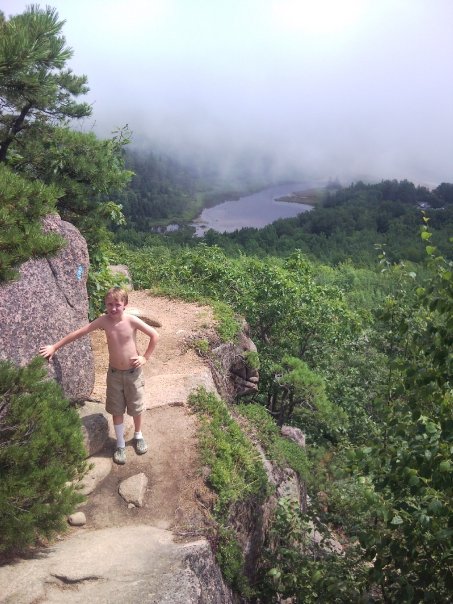 On the way UP

Orion and I had been planning on going to Acadia for the last 2 years and the time was finally right to take a week off and go. It was a fantastic trip filled with epic bike journeys to the top of mountains as well as several very difficult non-technical climbs that Orion did amazingly well on. The food in Maine was fantastic and we managed to have a great time despite the intense level of overcrowding that traveling to Maine in the peak of tourist season can bring.

The first day we spent 7 hours in the Boston Museum of science. There were some fantastic exhibits on Critter cams and Black holes as well as lots of other exhibits that Orion loved checking out. There was a robotic dog called Ibo and a touchscreen whiteboard where Orion showed off his Scratch programming skills by making an Octopus which consumed everyone else’s fish when it touched them then grew to take over the screen.